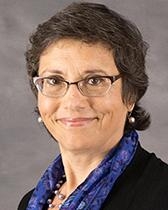 In her role at the Institute, Groshen examines issues related to the use of federal statistics and workforce statistics in program administration and decision making as well as engages in the ongoing work of the Institute on the future of work.

Groshen served as the 14th Commissioner of Labor Statistics, from 2013 to 2017. As commissioner, she headed the Bureau of Labor Statistics, which is the independent, principal fact-finding federal government agency for statistics on labor markets conditions, inflation, and productivity. Before that, she was vice president in the research and statistics group for the Federal Reserve Bank of New York, which she joined in 1994 after serving as economist at the Federal Reserve Bank of Cleveland and assistant professor of economics at Barnard College at Columbia University. She has been a visiting economist at the Bank for International Settlements in Basel, Switzerland, and has served on advisory boards for the Bureau of Labor Statistics and the U.S. Census Bureau. She is a visiting senior scholar at Cornell University’s ILR school.

Groshen earned a bachelor's degree in economics and mathematics from the University of Wisconsin-Madison and a PhD in economics from Harvard University.

Pandemic-Related Job Disruptions by Gender, Race, and Hispanic Ethnicity in May 2020

Will the True Unemployment Rate Please Stand Up? Misclassification in the May 2020 Jobs Report