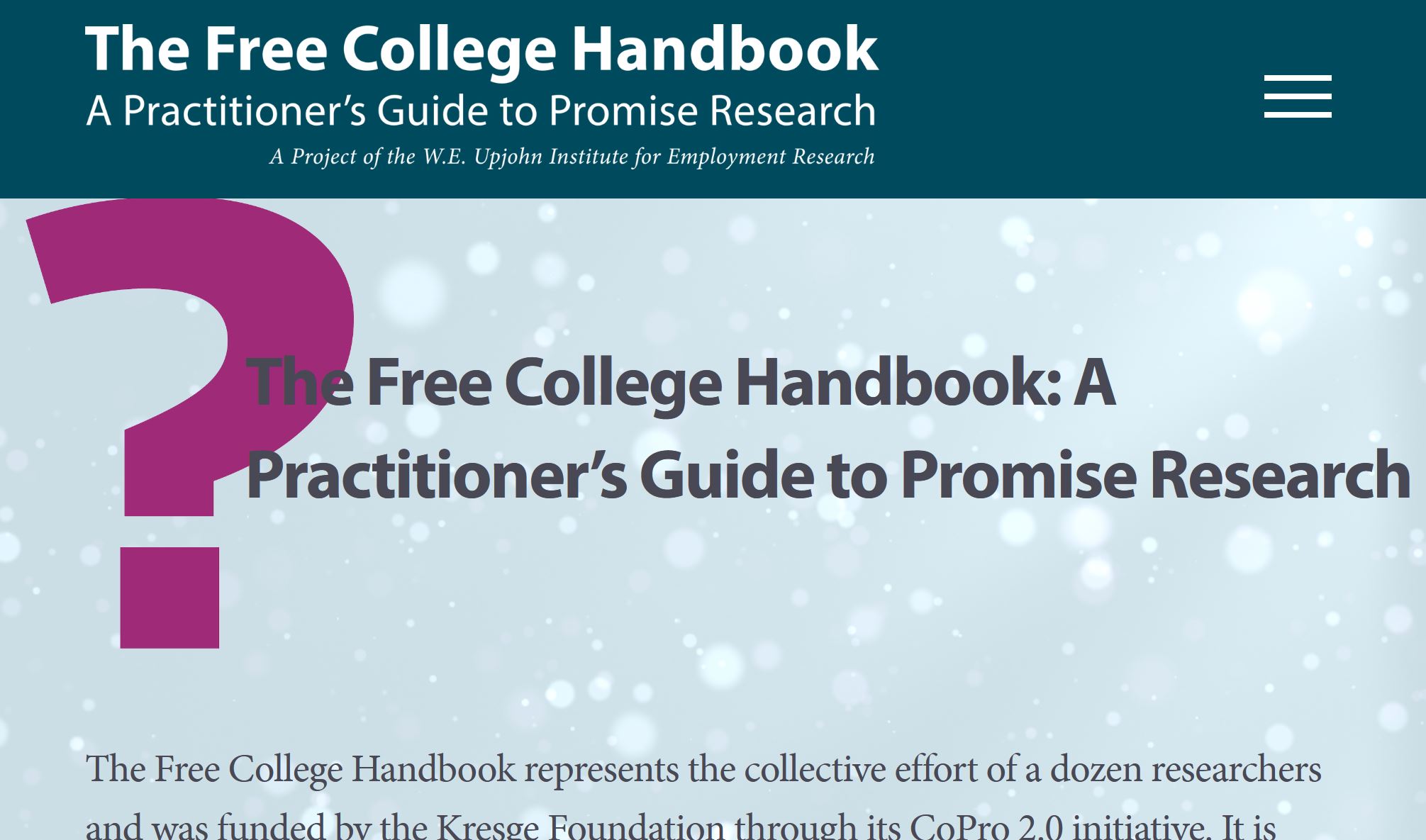 The Upjohn Institute today released a web-based handbook translating more than a decade of research on tuition-free college into actionable strategies for policymakers, civic leaders, college administrators and philanthropists. The Free College Handbook: A Practitioner’s Guide to Promise Research, co-edited by Michelle Miller-Adams of the Upjohn Institute and Jennifer Iriti of the University of Pittsburgh, represents the collective efforts of a dozen researchers from 10 institutions.

The handbook and accompanying videos, which can be viewed and downloaded here, was funded by the Kresge Foundation through a CoPro 2.0 grant to the Upjohn Institute. Contributing editors include the Upjohn Institute’s Brad Hershbein and Bridget Timmeney.

The modern free-college movement traces its origins to the 2005 announcement of the Kalamazoo Promise, whose place-based scholarship model has been replicated in more than 200 communities. Research into how best to design and operate tuition-free college initiatives, called “Promise” programs, has been under way for 15 years, but until now this research has not been comprehensively translated for use by a general audience of policymakers and practitioners.

The handbook, designed for this purpose, answers 24 questions related to three broad topics: 1) the rationale for Promise programs and their observed benefits; 2) the steps needed to build a Promise program, and 3) factors that can enhance a program’s success. The handbook covers tuition-free college programs begun by states, communities, and community colleges.

Miller-Adams and Iriti point out that while national action on tuition-free college has stalled, states and localities continue to innovate in this area, seeking to broaden the pipeline of students pursuing a post-secondary credential, reduce inequities in college access, and strengthen local economies and institutions.

The handbook and accompanying videos launched with a webinar, “Where is Tuition-Free College Headed,” hosted by the Upjohn Institute and the Campaign for Free College Tuition and featuring speakers including U.S. Undersecretary of Education James Kvaal, Stephanie J. Montoya of the New Mexico Higher Education Department, Emily House of the Tennessee Higher Education Commission, Rosye Cloud of College Promise and Edward Smith of the Kresge Foundation.