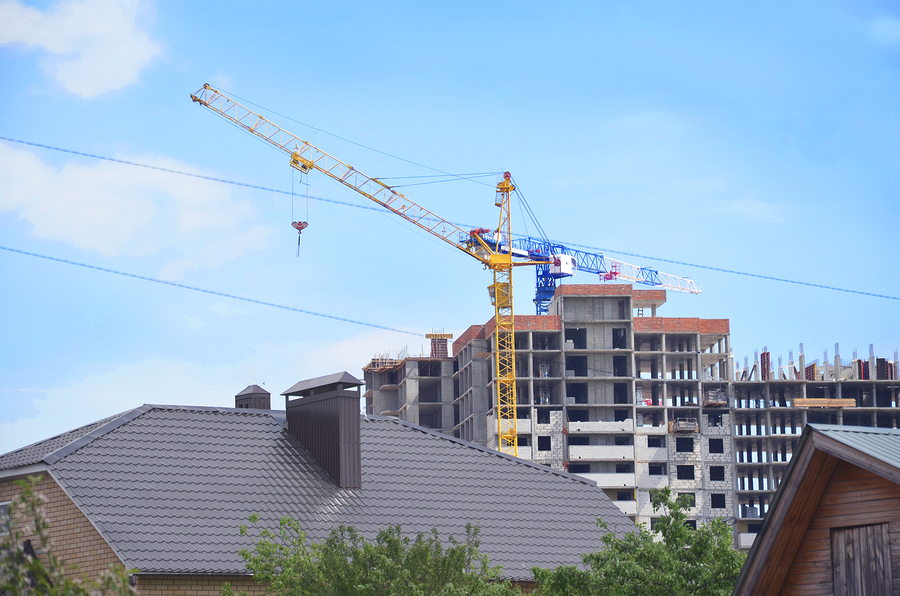 The image of a high rise under construction often stands in as an illustration of neighborhood change, alongside arguments that expensive new apartments will drive up neighbors’ rent. New research, however, finds the opposite.

In a new working paper and policy brief, Evan Mast and Brian Asquith of the Upjohn Institute and Davin Reed of the Philadelphia Federal Reserve Bank show new market-rate buildings lower nearby rents 5 to 7 percent and cause more people from lower-income neighborhoods to move in.

Previous research from Mast showed that building new multi-unit buildings helps keep rents down across a metropolitan area as people vacate their old homes to move into new buildings, setting off a ripple effect that opens more homes.  That may be true for the region, skeptics countered, but surely specific buildings make the blocks around them less affordable.

In fact, those specific buildings appear to be keeping rents lower than they otherwise would be, as the authors detail in a new working paper, “Supply Shock Versus Demand Shock: The Local Effects of New Housing in Low-Income Areas.” According to the paper, “there is not a tradeoff between regional and local housing affordability. New construction benefits both.”

The researchers used two different strategies.  In the first, they drew a ring around an approximately two-block radius around each new market-rate apartment building with 50 or more units in the study. They compared rental listings there with those in a ring just beyond, up to slightly more than a third of a mile.

The second strategy accounts for the possibility that a new building’s effects spill into the control group in the far ring by using a different control group: areas around buildings that would be completed in 2019. Because developers had pegged these areas for new apartment buildings but had not built them yet, they provided useful comparisons for areas around the buildings studied in the paper, which were completed in 2015 or 2016.

In every approach, the researchers found new construction lowered nearby rents, as listed in the Zillow database, 5 to 7 percent. Of course, rent prices are just one component of neighborhood change. The researchers also tracked the address-level history of renters in the new market-rate buildings to see the kinds of neighborhoods they had moved from.

They find that the new buildings cause more people move to the neighborhood from low-income areas—specifically, those below two thirds of the metropolitan area’s median income.

The researchers call it a “simple story of supply and demand”: blocking home construction will not keep rich people from moving to a neighborhood. Instead, the rich will just outbid residents for existing housing. The opposite happens when rich people choose a brand-new unit instead: rents decrease and more renters have more choices.

Viewed in light of this research, those images of high-rise construction do reflect changing neighborhoods, but the buildings are a response to the change instead of its cause.