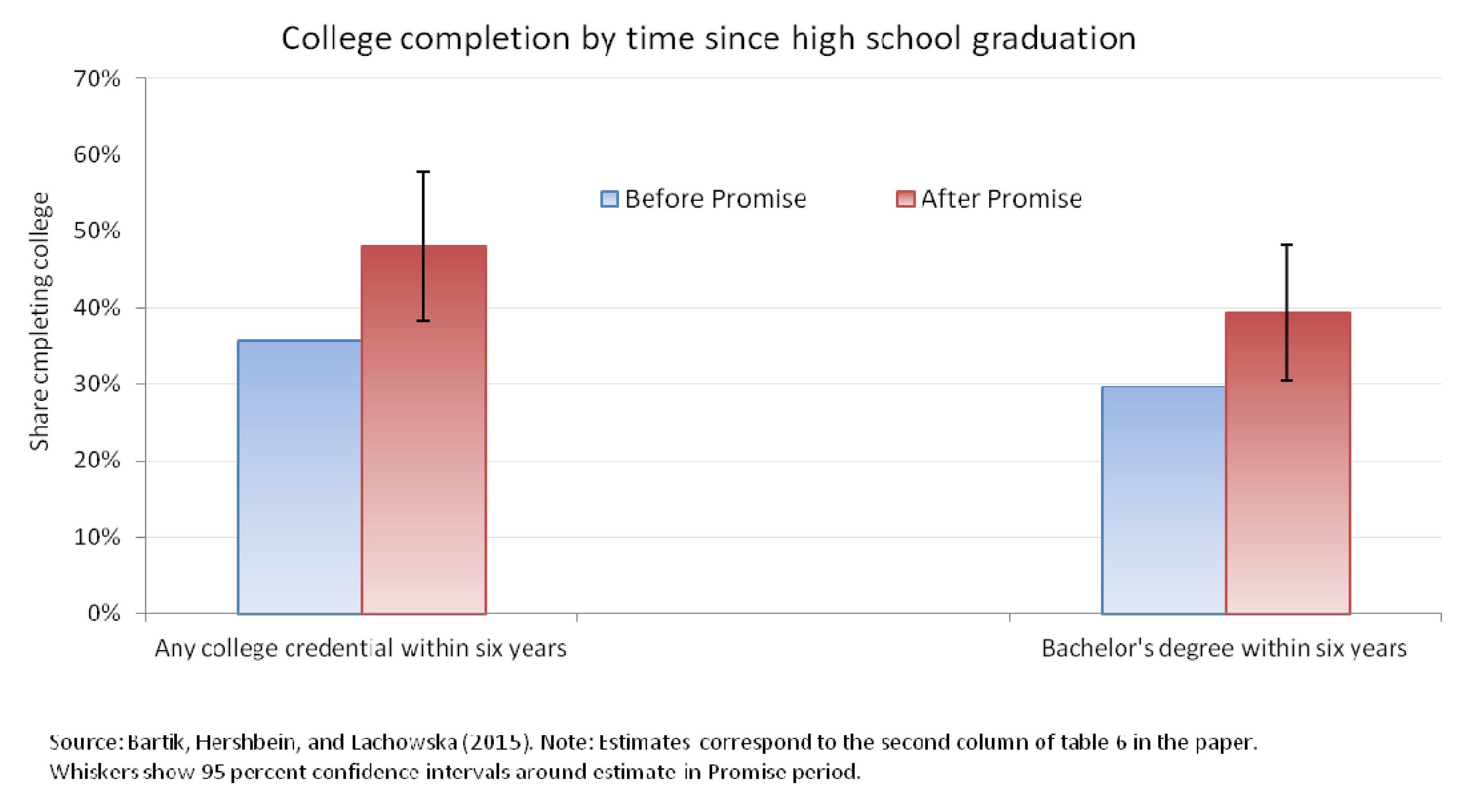 This month, the Kalamazoo Promise—a universal, place-based college scholarship program for eligible graduates of Kalamazoo Public Schools (KPS)—will award scholarships to its 10th cohort. Depending on how long those graduates were part of KPS, the scholarships will cover between two-thirds and the full cost of tuition and fees at any of Michigan’s public colleges and universities. This year’s graduates are the first who may also use the scholarship at 15 private Michigan colleges. Today, the Upjohn Institute releases a new research paper analyzing the college-going patterns of several cohorts of KPS graduates to determine the impact that the Promise has had on college enrollment and completion.

These effects are not driven by more advantaged students increasing their college completion—completion results are similar for students regardless of family income as measured by eligibility for free or reduced-price lunch. Proportionately, the effect of the Promise on college entrance and completion is much higher for low-income students. The probability of low-income students enrolling in and completing 4-year college increased by more than 50 percent, which is about twice the increase of their wealthier peers. Effects of the Promise on college completion are at least as great—and sometimes greater—for non-white students as for white students. By gender, the Promise boosted women’s completion of a bachelor’s degree but had no measurable effect on men’s completion.

“Place-based scholarship programs have great potential to reduce the barriers that keep low-income and under-represented minority students from earning a bachelor’s degree,” said Brad Hershbein, a co-author of the paper. “The Kalamazoo Promise research underscores the value of easy-access, universal resources to offset college tuition costs.”

Unlike most student aid programs, the Promise does not require students to demonstrate financial need or academic merit to qualify. Instead, eligibility is determined strictly on residency and sufficiently long enrollment in the school district. And unlike the Free Application for Federal Student Aid (FAFSA), the application form is a one-page document that requires no family financial information.

The increase in bachelor’s-degree completion began with increased enrollment in 4-year colleges and universities. The researchers estimate that the Promise increased eligible students’ chances of enrolling in a 4-year college or university by 34 percent. Many Promise-eligible students choose to attend Western Michigan University in Kalamazoo and Michigan State University, about 80 miles away.

The paper’s authors, Tim Bartik, Brad Hershbein, and Marta Lachowska, who are researchers at the Upjohn Institute, determined the effect of the Kalamazoo Promise on college outcomes by comparing students who were eligible for the scholarship (or would have been eligible for the scholarship had it been around earlier) with those who were ineligible. By examining this comparison both before the Promise was in effect—the KPS graduating classes of 2003 through 2005—and after it was in effect—the KPS graduating classes of 2006 through 2013—they isolate the effect that the Promise had on the roughly 90 percent of KPS graduates eligible for the program.

This study is not designed to determine any spillover effects that the Kalamazoo Promise may have had on the college-going culture of KPS or the community at large. It captures only the specific effects of eligibility for Promise tuition subsidies—and these effects alone are large enough to draw attention from policymakers.

A conservative benefit-cost analysis, focused solely on lifetime earnings benefits for Promise-eligible students and how they compare to the costs of the tuition subsidies, shows that those benefits exceed program costs at a ratio of more than 4 to 1—for every $1 paid in benefits (in today’s dollars), the average Promise-eligible student can expect to earn more than an additional $4. These results indicate that simple, generous scholarship programs have potential as a cost-effective tool to increase Americans’ educational attainment.