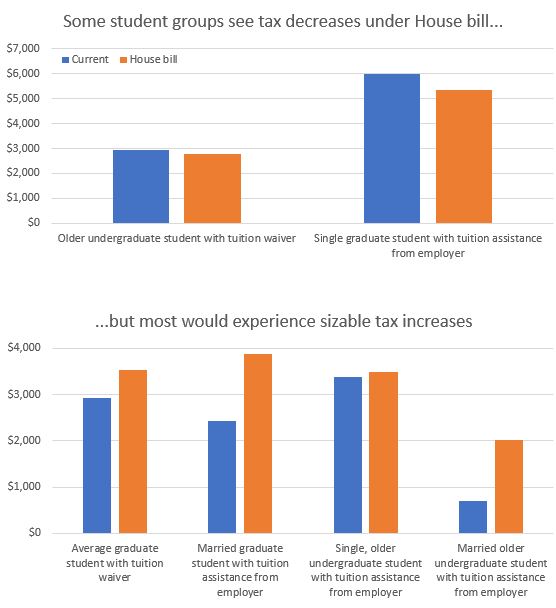 With ever-growing concern about rising student debt, American skill levels relative to other countries’, and the threat of automation for job growth, it would seem strange to remove benefits designed to make higher education less expensive for Americans. But that’s one set of provisions in the tax bill passed by the U.S. House of Representatives and being reconciled with the Senate version. The House-passed bill would:

The benefits slated to disappear are disproportionately ones that target education for older students, both graduate students and lifetime learners that need new skills to keep up with employers’ demands. Indeed, several commentators have sharply criticized the House bill for shortchanging graduate students, and the consequences for inequality among students of color. How could the bill specifically affect these students?

Among graduate students, 8 percent, or more than 290,000 people, received at least a partial tuition waiver in 2011–2012, the most recent year in which data are available. Two in five of these are PhD students, but more than half are Master’s students. About half of them work, not counting research or teaching assistantships, and one-third are students of color.

Excluding the value of their tuition waiver from their income, as in current law, students receiving a tuition waiver have an average adjusted gross income of a little over $33,000, although one quarter take in less than $9,000, and one quarter make over $42,000. The average tuition waiver is $8,700, but it’s closer to $13,000 for PhD students, who are concentrated at private research universities.

EFFECT: If this income were to become taxable, the average graduate student could see her taxes rise by more than $600, or 21 percent.[i] For a student making only $9,000 but getting an average-sized tuition waiver, taxes would rise from $0 to $660.

Nearly 400,000 undergraduate students also receive tuition waivers, and one-third of them are over the age of 24. These older students have an average adjusted gross income of $33,000, basically the same as for the graduate students. Their average waiver is smaller, however, at $2,500.

EFFECT: Since these older students are financially independent (by definition), their tax bill would also change, but because of the smaller waiver, their taxes would actually fall slightly, by $128.[ii] Those with larger waivers, however, could see their taxes rise.

Working students getting tuition assistance from their jobs

Another major provision that tends to help older students is employer assistance with tuition. Currently, employers may pay for up to $5,250 per year toward tuition for their employees, without this money being taxable for the employee. This benefit is more common than tuition waivers among both graduate students (14.5 percent, or 530,000 students) and undergraduate students (5.7 percent, or 1.3 million students).

It can also be more valuable, with 43 percent of assisted graduate students and 20 percent of assisted undergrads receiving at least $5,250. Given the necessary relationship with an employer to be eligible, students receiving this benefit are more likely to work full-time, be older, and be married. They also have higher incomes, with average adjusted gross incomes of $51,400 for graduate students and $36,000 for independent undergraduates.

Although the House’s version of the tax bill may help a few older students, it is likely to substantially increase taxes for most older students, particularly if they are married or receive larger amounts of tuition assistance. It’s not clear to what extent these students, facing higher tax bills, would be less inclined to continue their schooling, or simply borrow more money and become more indebted. What is clear is that the bill is unlikely to promote the more-educated and more-skilled workforce that employers increasingly demand.

[ii] Under the same assumptions, the initial tax bill is the same as for graduate students, since the income is (approximately) the same. Adjusted gross income would rise to only $35,500, and taxable income to only $23,300. At a tax rate of 12 percent, the tax bill would be $2796.