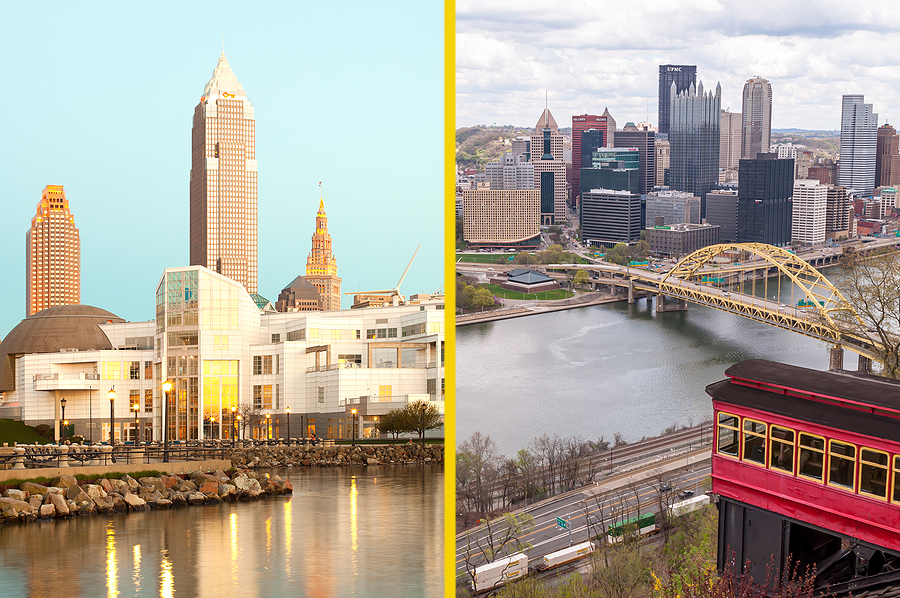 Telling Cleveland’s leaders to be more like Pittsburgh’s is picking a fight. While academic journals typically shy away from all-out brawls, the editors of Economic Development Quarterly marched into this one clear-eyed.

“We decided to embrace debate,” editor Tim Bartik writes in his introduction to the unique forum.

The instigator is Ben Armstrong of MIT, who argues that Pittsburgh’s university-led economic development strategy helped it bounce back from the collapse of its manufacturing industry much better than Cleveland’s business-led strategy. In the early 1980s, Ohio and Pennsylvania both passed statewide policies named after inventors—the Ben Franklin Partnership in Pennsylvania and the Thomas Edison Program in Ohio—to boost advanced technology industries. Both aimed to tap university and other research organizations to serve this high-tech vision.

That’s what happened in Pittsburgh, Armstrong argues. The two leading universities, Carnegie Mellon and the University of Pittsburgh, collaborated to lead the local effort. Cleveland also set up programs tying advanced manufacturing and biotechnology industries with local universities and research organizations. However, these local institutions collaborated less and eventually dropped out or divided their efforts.

The effect was to shift Cleveland’s attention and money away from new high-tech industries and toward reinvesting in the existing manufacturing economy.

It’s a compelling argument, Ned Hill counters, but not a fair fight. Hill taught at Cleveland State University for three decades before joining the faculty of Ohio State.

“Cleveland took a shot at the competition with the assets it had, and the shot missed its target,” Hill writes in response to Armstrong.

The cities weren’t starting from the same place, Hill argues. While Pittsburgh saw its steel industry collapse, Cleveland had a more diversified manufacturing base. It made more sense for Cleveland to buoy manufacturing than to bet on a new high-tech industry.

Universities helped spur Pittsburgh’s high-tech successes, Hill writes, but not just any universities: Carnegie Mellon and the University of Pittsburgh had better resources to succeed in research and tech than did Cleveland-area universities.

Two Pitt scholars enter the fray to argue the distinctions between Pittsburgh and Cleveland aren’t so stark, and there’s much more at play than an embrace or snub of advanced technology. Sabina Deitrick and Christopher Briem write that the Ben Franklin Partnership had its share of problems and, besides, other public-private partnerships had long shaped the local jobs mix.

“There’s much to learn from Armstrong’s piece,” Deitrick and Briem write, “but the positioning of the universities and the tech sector as the basis for so much of the region’s economic revitalization starts to look like the proverbial hammer in the toolbox where everything looks like a nail.”

Armstrong gets the last word on his critics. Sure, Pittsburgh has universities distinguished in the relevant fields, he replies to Hill, but so did many other cities that failed to spur tech jobs in their regions. The state-supported partnerships “increased the likelihood of Pittsburgh attracting economic activity in related industries,” Armstrong writes.

“Even if [Carnegie Mellon] had continued to excel at academic research, it was far from guaranteed that this expertise would have translated into local economic activity.”

Armstrong agrees with Deitrick and Briem that other factors influenced the cities’ trajectories but reemphasizes the power of states in shaping local development. “This role for the state in reshaping political coalitions can help make way for innovative actors like universities to play a more prominent role in redirecting existing resources and attracting new investment.”

All four arguments, plus Bartik’s introduction and summary, are available in the August issue of Economic Development Quarterly.