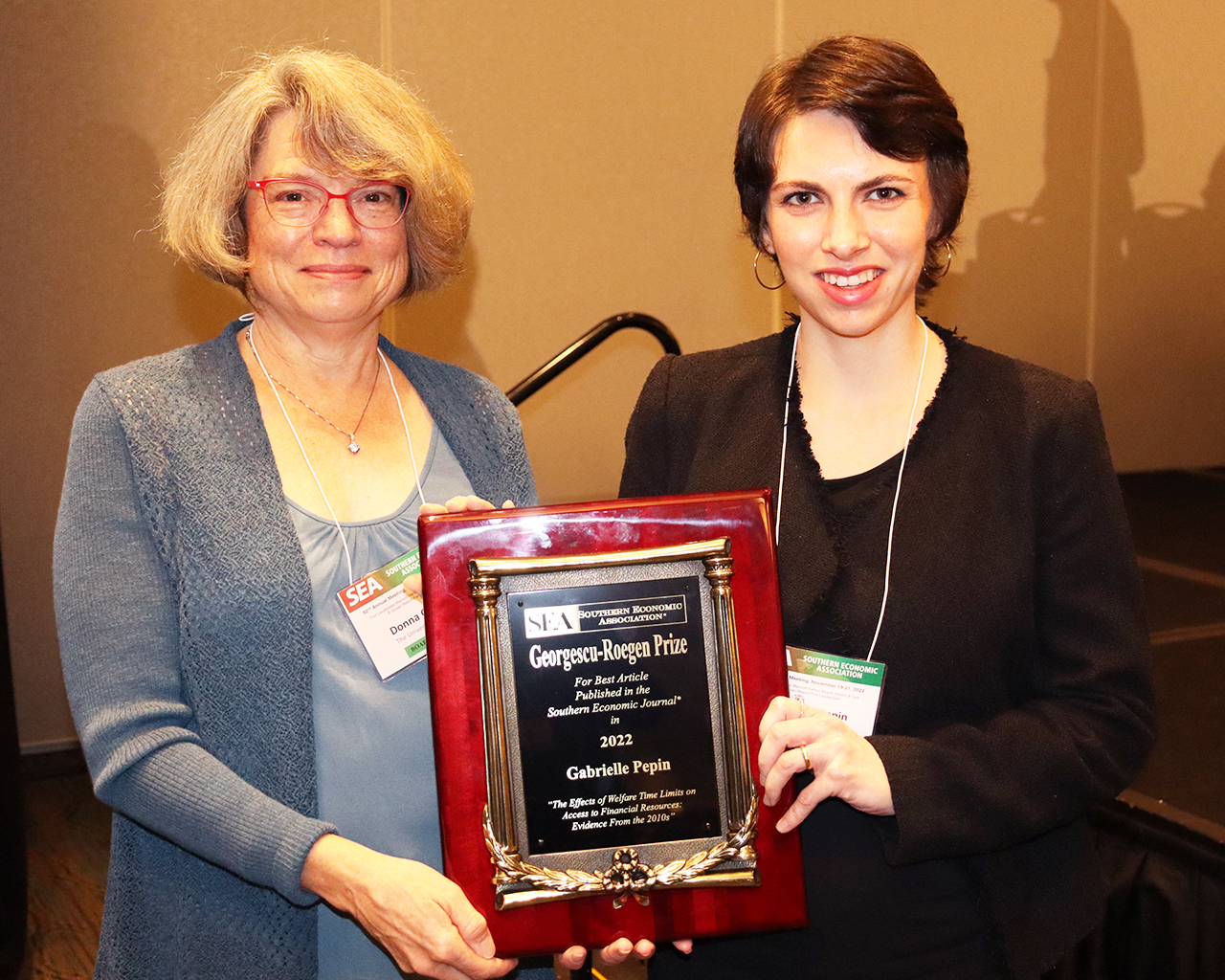 Upjohn Institute economist Gabrielle Pepin has won the 2022 Georgescu-Roegen Prize in Economics, awarded by the Southern Economic Association for the best academic article published in the Southern Economic Journal. Pepin was presented the prize Nov. 20 at the group’s annual meeting in Fort Lauderdale, Florida.

The prize recognizes Pepin for the paper “The Effects of Welfare Time Limits on Access to Financial Resources: Evidence From the 2010s.”

The paper examines the impact of state policies on access to Temporary Assistance to Needy Families, or TANF. In 1996, the federal government replaced Aid to Families with Dependent Children, an entitlement, with the TANF program that gave states a block grant and wide latitude in establishing policies regarding access to the program. While several papers examined the impact of the 1996 Personal Responsibility and Work Opportunity Reconciliation Act on labor supply and children’s outcomes, few studies have examined more recent state policy changes. Pepin’s keen insight was that several states reduced the 60-month time limit at roughly the same time of the Great Recession. She is the first to study the consequences of restrictions on TANF after 2003.

Pepin examines the reductions in TANF time limits in the states of Arizona, Kansas, Maine, Michigan, and Missouri between 2007 and 2018 using administrative data from the Department of Health and Human Services, and survey data from the American Community Survey. Her results are striking and policy-relevant. She finds that reductions in time limits reduce TANF participation by 26 percent in the year following their implementation. These reductions in TANF are only associated with increases in employment in Maine and Missouri and to a lesser extent in Arizona—a result that differs considerably from the earlier welfare reform literature.

Noting that TANF and SNAP benefits are linked, she finds significant reductions in SNAP participation in four of the five states. Likewise, she finds significant reductions in household resources in three of the five states. Given the variation in the effect of time limits, Pepin probes her results further by interacting time limits with state unemployment rates. Her results confirm the hypothesis that the labor supply effects of stricter time limits vary with economic conditions. Taken together, the results of Pepin’s careful research calls into question some of the conclusions of the extant welfare reform literature. As a result, it will be widely cited as the first to examine how more recent restrictions in access to TANF may have negative consequences for household well-being.

The published version of the paper is in the April 2022 issue of the Southern Economic Journal (Volume 88, Issue 4). An open-access working paper and policy brief on the research are also available.

The prize has been awarded each year since 1991. Recipients are chosen by the journal’s editor and two vice presidents of the Southern Economic Association.