Where is the shared prosperity? 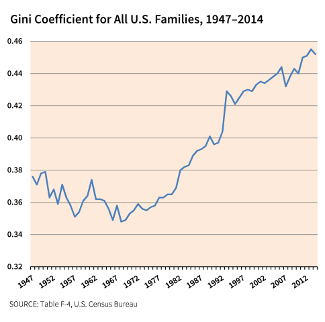 Since the late 1970s, corporations have transitioned from a "retain-and-reinvest" regime in which companies retain people and money to reinvest in productive capabilities. In its place is a "downsize-and-distribute" regime which aims to reduce costs for the sake of distributing corporate cash to shareholders. This is particularly true of one of the main drivers of the U.S. economy, the information and communications technology sector. As William Lazonick describes in his book Sustainable Prosperity in the New Economy? (Upjohn Press 2009), and later in a Harvard Business Review article titled Profits Without Prosperity, such efforts have contributed to the growing income inequality in the United States (as seen in the accompanying chart) as well as depleted investment in innovative new products and services.

Lazonick refers to this regime as the "New Economy Business Model" (NEBM). Whereas corporations once invested in well-paid career employees and emphasized research and development (the "Old Economy Business Model" [OEBM]), operating under the NEBM includes tapping low-wage, gig economy or overseas workers and spending cash (or using cheap credit) to fund large stock buybacks. These buybacks, which are at all-time highs, typically boost the value of the remaining outstanding shares and therefore the value of the stock-based compensation of  corporate executives. Hence, growing income inequality.

Can we reverse this troubling trend and encourage corporations to invest in new, innovative technologies? Yes, says Lazonick, but it would require increased government corporate oversight, particularly of the role of the stock market in the corporate allocation of resources. We should eliminate, as much as possible, speculation and manipulation currently used to influence financial markets, he says. Instead, stock price movements would more accurately reflect successful innovation—and corporate executives would be rewarded for their ability in value creation, not their facility in value extraction.

William Lazonick is a professor of economics at the University of Massachusetts Lowell, the codirector of its Center for Industrial Competitiveness, and the president of the Academic-Industry Research Network. His book Sustainable Prosperity in the New Economy? Business Organization and High-Tech Employment in the United States won the 2010 Schumpeter Prize.