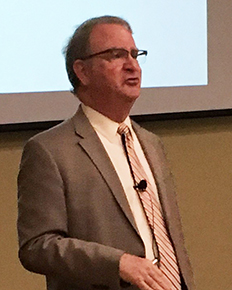 Professor Charles Ballard of Michigan State University delivered the lecture “The Fall and Rise of Income Equality in the United States” on September 27 as part of the Sichel Lecture Series at Western Michigan University. Ballard detailed the “Great Convergence” of income equality in the United States that grew out of policies of the 1930s and 1940s and a “Great Divergence” of inequality starting about 1980. Ballard called this income gap, which is now greater than during the Gilded Age, “the largest economic phenomenon of our lifetimes.” We spoke to Ballard following the lecture. The following is edited for length; a full transcript is available.

CB: That is most likely to happen through policy changes, through greater support for education and more progressive taxation, the various things I talked about. I don’t know whether unions will ever become strong again, but they were important in reducing inequality. We might have an increase in the minimum wage, although incrementally. A lot of economists think that education and training for good quality jobs is more important. You want people where their employer is happy to pay them $20 or $25 an hour. Target has announced that by 2020 they will pay $15. That might be because they think that’s where the equilibrium is going.

The number one way to help those at the bottom is full employment. We had this catastrophic loss of employment a decade ago, now we’ve had seven and one-half years of job growth. If we could continue that for another five years, 10 years, that would have to put upward pressure on wages. Unfortunately, the longest expansion in American history lasted 10 years.

Q: But that expansion didn’t narrow inequality. If this expansion continues, will it be any different?

CB: The downturn in ‘08 and ‘09 was so severe—in one month between December ‘08 and January ‘09, Michigan lost more than 100,000 jobs. Just staggering. You had this tidal wave of job losses for about 10 months. And now years later we’re still climbing out of that. National total employment has long since passed where it was before the recession. In Michigan, we’re still below where we were in 2000. Full employment goes a long way. After all, the poverty rate has now gone down substantially and noticeably in both of the last two years, and that’s because of more people at the bottom getting jobs. But poverty is still, what, 12 or 13 percent, which is just astonishing. Full employment is great, but I would be in favor of doing more to help those in the middle and at the bottom through tax and transfer policies.

Q: You talked about the import-export imbalance requiring a delicate touch. What are some of the things we could do to surgically improve the situation?

To the issue of international trade, when we raised our tariffs very high in 1930, our trading partners retaliated and the members of Congress who voted for those tariffs said “we’re protecting American jobs.” By two years later, one third of the nonfarm workforce was out of work. Of course, the Great Depression was not exclusively caused by tariffs, but they sure didn’t help.

You could place a tax on companies that want to move their operations overseas. But I don’t want to get into a trade war with China. Chinese imports have adversely affected substantial numbers of American workers, (but) rather than doing more to help American workers, there’s talk about “let’s just cut off the imports from China.” Well, that’s going to raise prices and you can expect some sort of retaliation. The Americans who are engaged in export industries will lose out.

For many sources of the great divergence, there’s an obvious policy. We slowed down our educational investment? Let’s do more to speed up our educational investment. We’ve made taxes less progressive? Let’s make them more progressive. But the consequences of a trade war would be so large that they might swamp anything that we would gain from “protecting” the jobs of some American workers.

CB: We’ve asked: there’s a wage gap between men and women. Do you think it’s mostly due to discrimination, mostly due to job skills or a combination? Same with whites and blacks. When we ask the same question about men and women and blacks and whites, people are more likely to say that the black-white difference is due to job skills, not discrimination. A lot of Michiganders and Americans, race makes us very uncomfortable, and I think we need to talk more about the things we are uncomfortable talking about. I think it’s difficult for a lot of white Americans, to say “hey, there’s a history of discrimination and it’s ongoing.”

Q: Some causes of the Great Divergence didn’t look obviously racist in charts and graphs, but you made a point to say, “I believe racism is a very important contributing factor to all of this.” Other economists might not address the underpinnings, while you walk into that potentially scary gap.

CB: It is scary to walk into, and one thing that makes a lot of Americans really mad is if they think you’re calling them a racist. A lot of whites don’t want to be called racists even if their attitudes may tilt in that direction.

I would argue that race is more important than any of these other things. I don’t think that it’s the whole thing. A social and economic phenomenon as big as the Great Divergence is bound to have multiple reasons. One has been this speedup in automation that has replaced certain types of workers. It’s easy to be angry at foreigners. It’s hard to be angry at the robot that is now in the factory where your father used to work.

I would like us to do even more on pre-K. I would like full-day kindergarten statewide. In K through 12, the Netherlands and Australia have 200 days a year. We have 180, with a three-month vacation where kids forget what they learned. Here’s the inequality part: the deterioration of skills is much worse among low-socioeconomic status kids. My child has a dad who’s a PhD; I’m going to make sure he’s in summer camp. But what if you’re a poor family with a single mom working two jobs and barely putting food on the table?

The savage cuts to higher education funding in Michigan I would reverse. I’ve heard so many stories of families where they’ve heard the high sticker price and don’t even apply to college. So preschool to PhD is a very high priority. It would help a lot of white kids but it would also help a lot of black kids too.