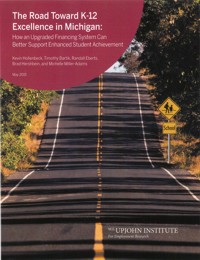 K-12 students in Michigan are losing ground compared to their peers in many competitor states, and to correct this situation the State must increase its investment in its educational system. This is the conclusion of a new report from the W.E. Upjohn Institute for Employment Research.

Funded by the W.K. Kellogg Foundation, the Skillman Foundation, and the Steelcase Foundation, "The Road Toward K-12 Excellence in Michigan" scrutinizes school funding provisions in Proposal A and the trends in student achievement and educational financing in Michigan relative to other states.

Researchers at the Upjohn Institute, led by Kevin Hollenbeck, spent the last year analyzing national and state data and performing an extensive literature review that led them to conclude that resources are the key to student academic success. While student achievement in Michigan has improved over the past decade, that improvement has been modest and lagging the pace seen in other states. Furthermore, persistent gaps in student achievement exist despite provisions in Proposal A that provide for an equitable allocation of resources across all of Michigan’s school districts. While Michigan has slowly grown its investment in K-12 funding, nearly every other state has increased K-12 funding at a faster pace and experienced faster growth in student achievement.

So, already facing budgetary constraints, how can the State find additional resources to invest in its K-12 system? The report lists several recommendations that would serve as initial steps on the journey to higher student achievement, including altering Proposal A to allow local districts to request millage enhancements from citizens for a limited period of time and increasing funding for at-risk students. As Michigan’s economy gradually improves, further investments could be made to help restore the State’s status as being one of the leading states in the nation when it comes to student achievement. The State’s long-term economic health relies on it.