More prisoners likely to see early release. Then what? 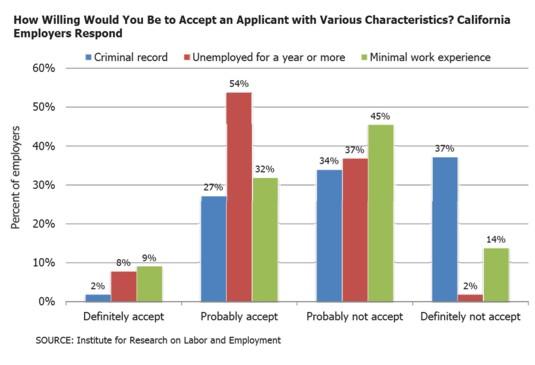 Both the federal government and the states have a strong interest in reducing prison populations and have been moving to do so. The growing costs associated with housing inmates has become a budget-buster, leading to the increased use of early releases of inmates doing time for nonviolent offenses as a way to cut costs. Once out of prison, however, these former inmates must find a way to reassimilate into society, including the labor market. As Steven Raphael points out in his new book The New Scarlet Letter: Negotiating the U.S. Labor Market with a Criminal Record, and as shown in the figure below, employers are often reluctant to hire applicants with a criminal record. (Twelve states have adopted “Ban the Box” which prevents employers from inquiring about an individual’s conviction history on a job application.)  Raphael addresses this reluctance along with other issues critical to the reentry of former inmates into the labor market with a set of policy recommendations aimed at facilitating this reintegration into the noninstitutionalized society. Raphael’s book, part of the Upjohn Press WEfocus series, is available as a free PDF download.