How much would people save if there were no Social Security? 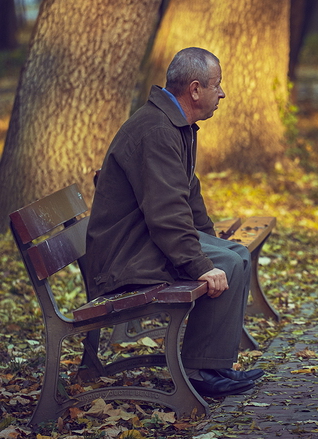 Pay-as-you-go pension systems are vulnerable to changes in demographics, such as increased longevity and declining fertility. To deal with these demographic changes, over the last two decades, many European nations have reformed their pension systems. These reforms, which often reduced expected pension payments, have created incentives for people to work longer and save more for retirement. These reforms have also created an opportunity to answer two important questions: whether lower future benefits nudge people to save more on their own, and if so, how much people would save if there were no public pension system. In a recent working paper, Michal Myck of the Centre for Economic Analysis and I attempt to answer these questions.

Man on benchIn 1999, Poland reformed its pension system. As a part of the reform, future benefits were lowered for individuals who were at the time 50 years old or younger. This created a “natural experiment”—an opportunity to observe the savings patterns of Poles affected and unaffected by the pension change before and after the reform.

To illustrate the change consider that, pre-reform, a typical Polish retiree could expect a pension to replace about 60 percent of his final salary.  For those affected by the 1999 changes, replacement fell to about 40 percent of final salary—a large drop. Did drops such as this lead to an increase in the saving rate?

To answer this question, we examined data from Polish Household Budget Surveys for the years 1997-2003. By comparing the saving rate before and after the reform, across similarly aged people—some affected by the reform, and others not—we can isolate the effect of the change in pension benefits on the savings rate. We also examined the extent of savings crowd-out due to future pension benefit cuts.

Our analysis showed that, overall, public pension crowds out private savings by about one-quarter PLN for each 1 PLN of public pension wealth. For older people, the middle-aged, and those with higher education, we find that private savings and pension benefits are almost perfect substitutes for each other. Meanwhile, younger households and those with lower-education do not fully make up for reduced pension benefits with more savings. Hence, not everyone makes up for the reduction in their pensions by saving just as much.

If the goal of pension reform is to increase private savings, policymakers should take into account the heterogeneity in how people react to pension benefit cuts. While some households might increase their savings in response to benefit cuts, other households might not save enough to make up the difference. We suspect the lack of responsiveness among the younger households could be due to liquidity constraints, lack of information about the changes, or uncertainty about how lasting the 1999 reform would be. However, the lack of savings response observed for the lesser-educated households is worrisome and echoes research findings that financial illiteracy puts some households at risk of having a low living standard in retirement. When designing pension reforms, policymakers should certainly not take for granted that all people are financially literate.

Read The Effect of Public Pension Wealth on Saving and Expenditure