How Did Employee Ownership Firms Weather the Last Two Recessions? 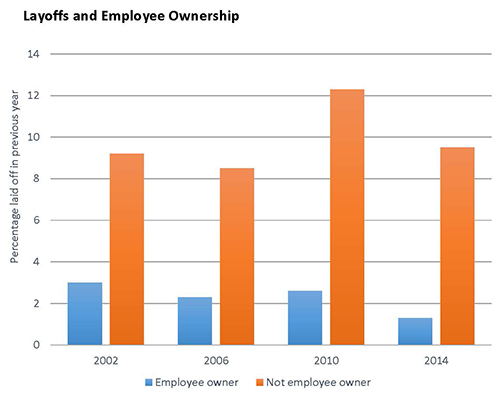 Some 23 million U.S. workers, or about one-fifth of all private sector employees, own stock in the companies they work for. This stock ownership affords them the opportunity to share in the firm’s profits and it gives them a voice in workplace decisions. While much documentation exists on how the various forms of employee ownership impact outcomes for firms and workers, until now there has been scant evidence on the link between employee ownership and employment stability and firm survival.

In How Did Employee Ownership Firms Weather the Last Two Recessions? Employee Ownership, Employment Stability, and Firm Survival:1999–2011, Fidan Ana Kurtulus and Douglas L. Kruse present new evidence that links employee ownership with increased employment stability (see figure at right) and firm survival. In fact, in comparing the performance of employee ownership firms with that of otherwise similar firms during the last two recessions, the authors find that the macroeconomic effects of employee ownership tend to decrease unemployment and stabilize the economy under recessionary pressures.

Kurtulus and Kruse conclude by saying

“Combining our findings with the empirical literature as a whole, we see a body of evidence showing that, despite the theoretical free-rider and financial risk objections raised against it, employee ownership is generally linked to increased worker performance and commitment, enhanced employee cooperation toward firm goals, lower turnover, higher pay, and wealth, as well as to improved firm-level outcomes such as higher productivity, greater employment stability, and firm survival. These benefits—particularly the greater stability and survival, which can help the overall economy by reducing unemployment and resisting recessionary pressures—can provide a clear justification for widespread government support to broaden employee ownership programs.”

How Did Employee Ownership Firms Weather the Last Two Recessions? by Kurtulus a…
View All Highlights