Do states that produce more college grads manage to keep them? 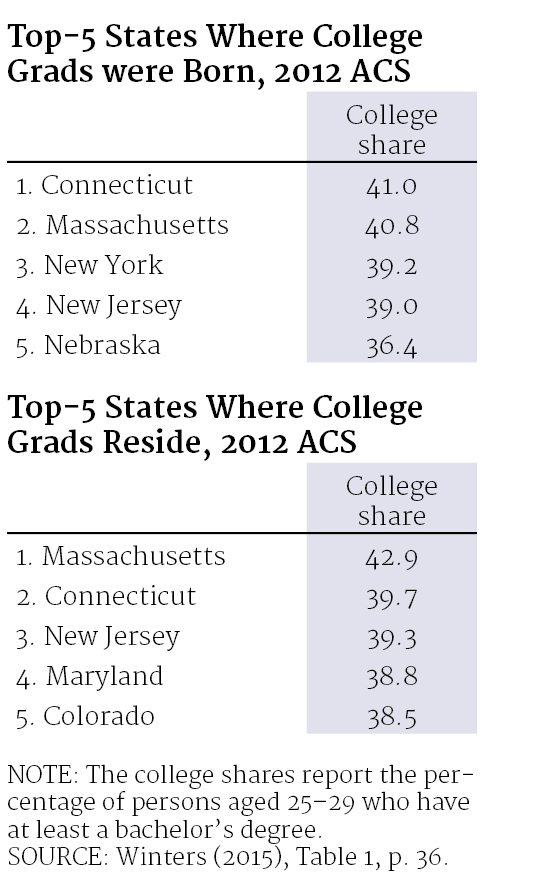 A recent Upjohn Institute working paper by John V. Winters finds that the relationship between a state’s production of college graduates and its supply of college grads in the workforce has increased over time, becoming nearly proportional in recent years, especially for younger residents. The table at left shows the top-5 states for college share rankings by birth and by residence, with the most educated ranked first.

Given these findings, state and local governments may also wish to consider place-based college scholarships as a workforce investment with both current and future benefits. A recent working paper by the Institute’s Tim Bartik and Nathan Sotherland finds that such scholarship programs (e.g., The Kalamazoo Promise) reduce out-migration for at least three years after their announcement. Reduction in out-migration is especially strong for families with children. While place-based scholarships offer working adults the incentive to stay and reduce their future college expenses for their children, the support to complete college might also prove to have long-term benefits in increasing the state’s supply of college-educated workers.

Read “The Production and Stock of College Graduates for U.S. States” by John V. Winters

More research and experts on postsecondary education
View All Highlights