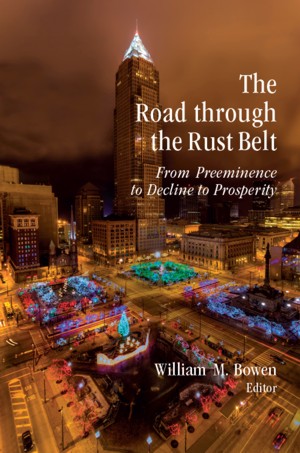 Faced with the decline of the traditional manufacturing-based economic engine, a handful of fading Rust Belt cities are turning to the arts as a means for revitalizing their local economies.

Among them is Cleveland, a city known for its rich cultural heritage. While the arts may not replace the number of high-wage factory jobs lost in manufacturing, it does offer different types of benefits related to quality-of-life that help redefine a community’s concept of prosperity. Using the arts as an economic development tool appears to be working in Milwaukee and Grand Rapids, Michigan, and it appears to be successful in Cleveland.

In a chapter titled “Distinctly Cleveland: How the Arts Are Helping to Revitalize Rust Belt Cities,” Gregory M. Sadlek and Joan Chase, both of Cleveland State University, detail the successful efforts made by promoters of the arts in Cleveland to inject economic vitality and excitement into a once-downtrodden city. These efforts include public support for the arts, arts and education partnerships, arts festivals, and, last but not least, the determined actions of individuals. Overall, according to Rocco Landesman, former chairman of the National Endowment for the Arts, Cleveland is seen as an “arts city” and other cities would do well to follow its lead (p. 142).

The chapter appears in “The Road through the Rust Belt: From Preeminence to Decline to Prosperity,” William M. Bowen editor (Upjohn Press 2014), and is available for free download.

The arts are also seen as important drivers of economic development in other parts of the world.  Interestingly, "Creativity, Jobs, and Local Development" was the theme of the recent Annual Meeting of the OECD LEED Forum on Partnerships and Local Development. Presenters there addressed "how localities can support culture and creative industries as a source of knowledge and job creation and how the creative industry can act as a powerful driving force in areas such as tourism, urban regeneration, and social inclusion." So using the arts as an economic development tool is not just an American phenomenon, it is recognized as a valuable asset on a worldwide stage.

Distinctly Cleveland: How the Arts are Helping to Revitalize Rust Belt Cities
More research on regional policy and planning
View All Highlights