From Research to Practice: Prisoner Re-Entry 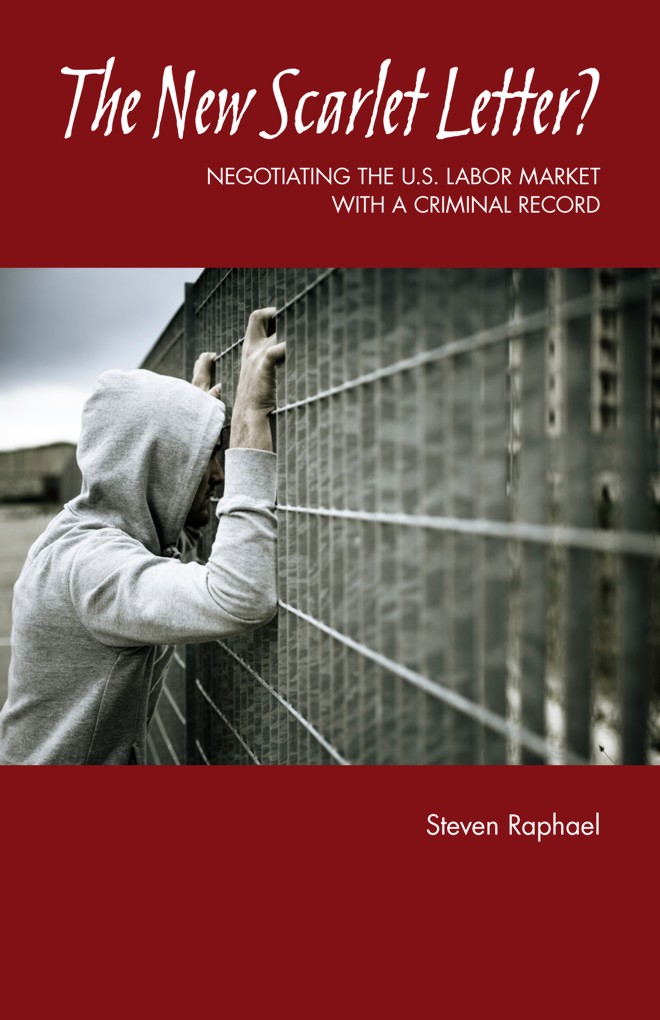 Since the late 1980s, state and federal sentencing laws have put more people in prison and kept them there longer. In July, President Obama announced he expects to see Congress pass a sentencing reform bill by the end of the year.

But what happens when the wave of inmates created by harsh sentencing laws finally leave prison? As a recent New York Times article shows, too often ex-prisoners are released with little preparation, few funds, and fewer plans.

The New Scarlet LetterSentencing reform—a strategy advocated by public policy professor Steven Raphael in The New Scarlet Letter: Negotiating the U.S. Labor Market with a Criminal Record (Upjohn Press 2014)—can tackle the root cause of the problem. However, even if new sentencing policies reduce the numbers of people entering the prison system, the 700,000 thousand prison inmates released each year will still need more and better help to re-enter society.

In his book, Raphael suggests some key strategies: planning with prisoners before release, building a strong network between corrections officials and community service providers, and working with employers to find appropriate ex-offenders and mitigate the risks involved in hiring people with criminal backgrounds.

Since 2005, Michigan Works! Southwest has successfully partnered with the Michigan Department of Corrections to provide prisoner re-entry services. Over the life of the program, nearly 72 percent of ex-offenders who received services in Kalamazoo and St. Joseph counties have stayed out of prison since their release.

After release comes the biggest pitfall: about 30 percent of ex-offenders eligible for services never show up.  But for those who do—even if they just come in for a bus token—there is access to a wide network of community services, and a clear strategy: housing first, then a job, then counseling. That is the key—having the relationships,” said Mitchell. "Because of the relationships, it’s easy to refer John Doe to Ms. Smith. Because Ms. Smith has worked with multiple John Does, she knows the barriers and what John Doe is dealing with."

While housing is often the first and greatest challenge, finding a job is no easy task, either. Michigan Works! Southwest screens candidates according to employers' criteria, such as no sex or violent offenses, and encourages employers to take advantage of Fidelity Bonding, a federal program that offers free insurance coverage to employers who take a chance on ex-offenders. "Employers who have tried it come back," said Mitchell.

For ex-offenders with red-flag crimes on their records and those with spotty or nonexistent work histories, temporary services can be a starting point. "We use temp agencies as a job training institute,” Mitchell said. “Temp services can build up their resumes and get them the work experience they haven’t had for many years, or at all."

In recent years, state budget cuts have meant fewer inmates were flagged for re-entry support. The narrower focus has allowed Michigan Works! Southwest to carry smaller caseloads and get smarter about specific needs. For example, sex offenders almost always qualify for re-entry services, but housing them presents special challenges. To find housing for former sex offenders, Mitchell created a map of Kalamazoo County with all schools and parks identified and the required 1,000-foot radius circled around each. Then he found landlords beyond those boundaries and persuaded them to rent to participants, often as a group.

"If the guys all work in one place and you can put them in the same house, they’re accountable to each other to do what they’re supposed to be doing," said Maxwell Schmitt, MPR data specialist. Over the last year and a half, more than 85 percent of ex-offenders supported with Michigan Works! Southwest services have not committed further crimes that would return them to prison.

Word of the success of Southwest Michigan’s re-entry program has spread through the prison grapevine. In 2011, Brian McKinney was doing time in the Ojibway Correctional Center on Michigan's Upper Peninsula for drug and weapons possession charges. As it was his first offense, he was not a likely candidate for prisoner re-entry support. However, because he had heard through a friend about the high-quality support available in Southwest Michigan, he lobbied to be released on parole in Kalamazoo. When his request was granted, he sought out Mitchell and asked for help getting started at Kalamazoo Valley Community College (KVCC).

"I knew I was going straight to school," McKinney recalled. "Mr. Mitchell worked with the guys going back to school who weren’t 18 or 19, putting together a support system. We were paired with people in their second year who could say, 'here's a professor you should take.'" Thanks to correspondence courses he took while incarcerated, McKinney was able to earn his associate’s degree at KVCC within a year, and transferred to Western Michigan, where he studied computer engineering. He has put completing his bachelor's on hold to pursue a variety of startup projects connecting underserved youth with opportunities in STEM (science, technology, engineering, and mathematics).

"For me, in a new environment where I didn’t know very many people, having that community with Mr. Mitchell and the resources of KVCC was very important," McKinney said.

"He just took off. Now he’s a shooting star," said Mitchell. Stories like McKinney’s may become more common thanks to a new policy development—President Obama recently announced that some prisoners will have their eligibility for Pell Grants restored through a pilot program. "That would be the most significant opportunity. Community colleges could really provide training and skill development before they come out."